What a loaded question. A holster is a pocket, pouch, or another form of receptacle used to hold something else to get it out of your hands. That something else could be a gun, a cellphone, a screwdriver, a number of tools, or anything you wish to carry on your person. For the purpose of this article, we will be talking about a holster made for carrying a handgun. 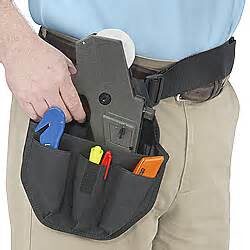 Handgun holsters have been around for a long, long time. They were first just a belt holding up your pants. Men would put the barrel of the gun between their belt and pants to hold it and have it available if it was needed. Then someone created a leather pouch to carry it in and hung the pouch on their belt.

Later the gunbelt was  developed and even put cartridge loops around it. This was the beginning of the western gunbelt in the early 19th century.

Some of the earlier holsters had covers or straps over the gun. These were mainly used by the military. Later on the open holster was developed for the cowboys so they could draw the weapon faster in the case of an attacking animal, either the four-legged or two-legged kind.

The holster’s main purpose is to hold the gun close by and protect it from the elements. It also keeps the gun held in a safe manner so you don’t get shot accidently. [By the way, the common belief is that there is never an accidental discharge of a firearm, only negligent discharges.]

Concealed carry holsters were designed for hidden handguns when some of the bigger cities in the east decided they didn’t want everyone in town carrying a gun around. So the guns were being held in holsters under the arm with straps around the shoulders, in a vest or jacket pocket, or a smaller holster attached to the belt of the pants, even behind the back. Then they were covered by a jacket.

In the late 1900’s and into the 20th century, people were getting more creative. They started developing more ways to conceal their weapons. The ankle holster for men and  garter belt holster for the ladies were becoming more commonplace.  Some men would even hide a smaller gun like a derringer in their hat.

carry are the belly band, a wide elastic band around the mid-section with pockets sewn in, undershirts with sewn-in pockets,

and even a band around the bicep to hold a gun under the sleeve of a short sleeved shirt.

Pocket holsters are being made with a sticky backing so the holster isn’t withdrawn along with the gun. A company called Sneaky Pete is making a holster that looks like a PDA pouch on the belt. Ladies purses and fanny packs are made with secure gun-holding pouches in them. Flash Bang is a company that makes ladies holsters and has one that clips to her bra.

Military and police are also getting creative about how to carry their firearms when on duty. They now have holsters made of nylon and velcro around their legs just above the knee, on their chest, or on the side of a bullet-resistant vest

.The point here is that anywhere you think you can carry a gun, someone is making a holster for it.

I read an article once that showed Massad Ayoob hiding 56 guns on his person at the same time. This would not be an everyday occurrence, of course, but that is creativity.

As I said in one of my blogs, there are probably more holsters for each handgun out there than there are handguns. You just have to find the one that fits your need. If you would like some assistance with finding a manufacturer or advice about making one for yourself, just send me an email. I will be happy to help in any way I can.

This is a question most of us have asked ourselves a dozen times, or more. Can I … END_OF_DOCUMENT_TOKEN_TO_BE_REPLACED